Know your GPS Antenna facts? Become an now expert with our Ultimate Guide 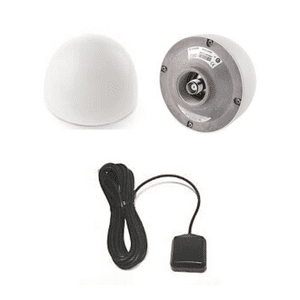 A GPS antenna is a device that receives radio signals from GPS satellites at varying frequencies. The antenna expands the signals and converts them into electronic signals so that they can be interpreted by a GPS receiver. The GPS receiver then uses these signals to give an accurate estimate of the receiver's location.

Simply put, a GPS antenna helps you establish connectivity to the Global Positioning System (GPS). It is a system that was initially owned by the US Department of Defence. For years, GPS usage was limited for the military, but from 1983 onwards, civilians have been using it as well.

If you've recently acquired a GPS antenna and are unsure of how to use it, this article should answer any questions you may have.

Here are some of the basic terms you need to know before diving deep into using your GPS antenna.

A GPS splitter is a device that allows you to connect an antenna to two receivers simultaneously.

The GPS antenna input is used for satellite radio and GPS.

Some cables can be used to connect a GPS device with an external GPS antenna or even an internal GPS antenna installed within a separate device. At one end of these cables, there is a radio frequency connector that connects with the antenna.

GPS cables (coaxial cable) are usually short and often double shielded to keep signal loss to a minimum. The lower your signal loss or variance, the more accurate your GPS readings will be.

The antenna frequency is the number of wave cycles per second. GPS signals are broadcast at sub-2 GHz frequencies by using the L-band of the radio frequency spectrum.

A GPS Antenna mount is the mount used to attach a GPS antenna.

Typically, you can install a GPS antenna in one of two ways; wall mounting or pole mounting. In both cases, keep in mind to face the mounted antennas towards the sky for best results.

No,  GPS antennas are usually omnidirectional. This means that they can receive and transmit signals from and to different directions equally.

A GPS receiver is a device that locates multiple satellites, calculates their distances from one another, and then calculates its own distance from those satellites. This process of triangulation is what makes GPS receivers so accurate. The GPS antenna is responsible for converting and amplifying signals generated by the receiver, as well as interpreting signals from the satellite network.

Most GPS receivers include a small omnidirectional antenna.

GPS antennas can be either active or passive. An active antenna has an amplification stage, giving it greater accuracy and dependability over a wider reception range. Active GPS antennas are more complex than passive antennas and are more challenging to install.

In contrast, passive GPS antennas have no amplification stage. Their accuracy is still adequate for most consumer applications, however.

Workings of a GPS Antenna

How Does a GPS Antenna work?

Our earth is surrounded by numerous satellites that transmit radio signals down to you.

Multiple cycles of this process occur simultaneously, and so the receiver can also extrapolate its own speed and direction of travel.

Sometimes signals moving between the receiver and satellite network are delayed by interference in the upper atmosphere. In these cases, the receiver compensates for the delay when making its calculations.

How Does a Directional Antenna Work?

A directional antenna receives signals efficiently from just one direction. Directional antennas are more energy efficient, as they're not sending and receiving information from every direction, instead confining themselves to a single point.

In this direction, they may pick up a weaker or more distant signal than an omnidirectional antenna using the same amount of power.

How to Use a GPS Antenna?

Generally, the internal GPS antennas work fine on most navigation devices. However, you may want to supplement your receiver with an additional antenna if it's older or under-powered.

External antennas are often used when the path between the sky and your GPS device is unclear or restricted. In addition, external antennas can help increase the speed and accuracy of older GPS receivers.

Can a GPS Antenna Go Bad?

One common point of failure in a GPS antenna is the balun. The balun's job is to convert balanced signals into unbalanced signals. They're usually very durable, but are vulnerable to extreme temperatures. In some cases, a balun can rust. The wires within an antenna are also vulnerable to damage, and even external damage to the antenna's housing can cause it to become less effective over time.

How to Test a GPS Antenna?

You can test the performance of a GPS antenna with a spectrum analyzer.

A spectrum analyzer is a device that evaluates the signals reflected from your antenna. Keep in mind that to test the performance of a GPS antenna you must connect it to a receiver.

Apart from that, you must also watch out for two things:

How to Check Your GPS Antenna with a Multimeter?

A multimeter is an instrument that measures the electric current, voltage, and resistance of electronic devices over a variety of ranges. If you want to check your GPS antenna's resistance, you need to set the unit measurement of your multimeter to ohms, denoted by the "Ω" symbol.

Then, follow these steps to get the most accurate results when testing your GPS antenna's resistance.

Where Is the Best Place to Mount a GPS Antenna?

The ideal place to mount a GPS antenna is out in the open, allowing radio signals from orbiting satellites to reach the antenna uninterrupted. This way, your antenna will be directly facing the sky with no obstructions whatsoever.

If you're mounting your antenna to a car, place the antenna in the middle of the car's roof. It's best to use an antenna mount to keep the antenna fixed to its position. Also, if you have any roof bars or radio antennas nearby, you must mount the antenna at least 5 cm away from them to keep the interference as low as possible.

For any GPs antenna installation, refrain from placing the antenna close to the ground, walls, or the edge of a roof. This is because reflections from such objects may interfere with the signal significantly.

If you're looking for a GPS antenna with a USB connection, you may not find it that easily. Such types of connections don't come with standalone GPS antennas, so the closest you'll get is a receiver with an internal antenna and a USB connection. This one by GlobalSat, sold by Amazon, is a good example.

GPS antennas do not normally come with an SMA connector. However, you may get an F-type connector with them easily, which is a bit bigger than SMA.

NMEA 0183 is designed to ensure a one-way data transmission from a "talker" device to one or more "listeners." There are many GPS antennas compatible with an NMEA 0183 output, including the Trimble Acutime 360 Smart Antenna.

U.FL and similar connectors, such as I-PEX, UMCC, or IPX, all support small coaxial cables of the kind used by most wireless devices. Most manufacturers and consumers prefer these connectors due to their compact size and low cost.

Because these coaxial cables are smaller in size, they are much easier to manage.

Unfortunately, if you are looking to get a U.FL connector along with your GPS antenna, you'll usually need to by your U.FL adapter separately.

FAKRA connectors are high-quality SMB-based interfaces used in automotive applications. These connectors can even operate at up to 6 GHz.

If you want to connect your GPS antenna with a blue FAKRA connector, you can do so with any of Trimble's Mini Mag Mount Antennas.

BNC, or Bayonet Neill-Concelman, connectors come for almost all types of coaxial cables. These connectors are usually used at lower frequencies, typically below 4 GHz. They are available in both 50-ohm and 75-ohm versions.

If you are looking for an upgraded version of BNC, you can go for TNC (also known as Threaded Neil-Concelman). This connector ensures its security with the use of threads that reduce leakage. As a result, the connectors get the opportunity to operate at higher frequencies, even up to 12 GHz.

Another plus of using TNC is that it's waterproof, so you can use it for outdoor antennas and cell towers without any worry. You can also get these connectors in a reverse polarity variant.

However, if your antenna only operates at frequencies lower than 4 GHz, you should go for a BNC connection rather than a TNC.

A GPS receiver is an L-band radio processor that determines the location of the user, their speed, and the precise time (PVT) by processing the signals sent by a GPS antenna to orbiting satellites, which then return the signal to the antenna.

GPS repeaters are devices that extend the range of GPS signals. They work by duplicating, or repeating, the signal from a GPS antenna. They're typically placed outdoors and used when a broad area of very precise coverage is necessary.

GPS cables are coaxial cables specifically designed to transfer GPS signals from an antenna to the receiver.

Can You Split a GPS Antenna Signal?

How Does a GPS Splitter Work?

Can You Split a GPS Antenna Signal Among More than Two Receivers?

Yes, an antenna signal can be split between four or even eight receivers. An example of this type of GPS splitting is seen in a one-input, four-output splitter.

Can You Splice GPS Antenna Wire?

Yes, you can, depending upon the type of transmission line you are using.

However, remember to repair the wire in a way that won't change its impedance. You can use a multimeter to confirm the impedance of a repaired wire.

In the case of newer receivers, most of the components of the receivers are squeezed into an antenna. These GPS receivers don't work in the same way as a standard transmission line. Instead, they have a multi-conductor cable.

The cable supplies voltage to the receiver that generates an NMEA-0183 serial data output signal. Some may also have a conductor to assist in sending data to the receiver.

With such types of cables, you don't have to sweat about maintaining the characteristic impedance. Thus, you can surely splice this antenna wire.

How Far Should the Cable from the Receiving Antenna be from the GPS Source Splitter?

When determining the distance between the source splitter and the receiving antenna, you need to consider the amount of signal loss. Splitter loss will account for a fraction of this signal loss.

Splitter loss is due to the split ratio, input connectors, output connectors, and material and build quality of the splitter. If you're using high-gain antennas (35dB), receivers tend to operate well in the 13dB +/- 2dB range of total attenuation between the receiver input and the antenna.